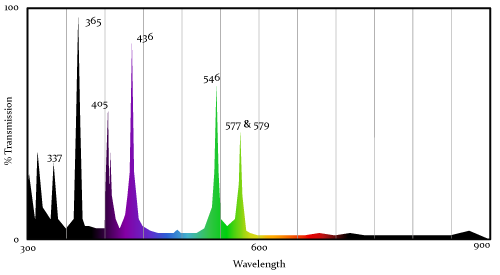 Figure 20: Spectrum of a mercury arc lamp. (Mid-UV output below 300nm is not shown.)

The most common light source for fluorescence microscopy, chosen for its high brightness (known technically as luminance or radiance) in the ultraviolet and visible spectrum, is the mercury arc lamp. The spectrum of this light source (Figure 20) outputs most of its light in a few concentrated, narrow bands called lines – with each line being approximately 10 nm wide. Conveniently, most general-purpose filter sets have excitation filters that transmit one or more of these lines. 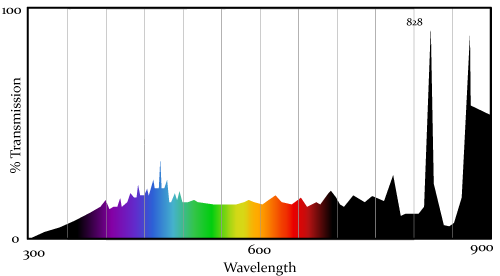 Another light source used in fluorescence microscopy is the xenon arc lamp (Figure 21), which exhibits a relatively continuous output spectrum in the visible range. Xenon arc lamps are preferred in systems where the spectral characteristics of dyes and/or specimens are being analyzed quantitatively, but they are not as bright as a mercury lamp of equivalent wattage. Even in the region of FITC excitation (between 450 and 500 nm) where the mercury lamp is relatively weak, the xenon arc lamp is only marginally brighter. This is primarily a result of the fact that the light-producing arc of the xenon lamp is about twice the size of the arc in the equivalent mercury lamp, which reduces the amount of available light that can be focused onto the specimen using a typical microscope configuration. 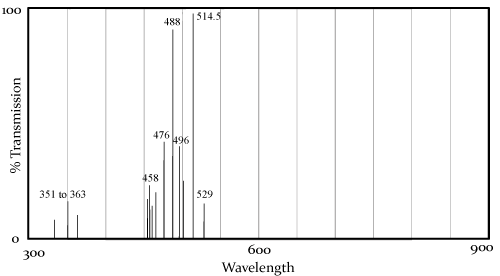 Laser light sources have become an increasingly common choice for those utilizing certain types of fluorescence microscopy, about which more is described in our Laser Application note, written by Michael Stanley, PhD. The output spectrum produced by a laser is confined to a smaller range of wavelengths due to their coherence. This means that the blocking range of excitation filters need only cover the range of output of the laser. For example, IR blocking is not required for the argon-ion laser (Figure 22).